Home > News > Regulation and technology in the insurance market

Regulation and technology in the insurance market

Regulation and technology in the insurance market

In summary, Market Insight May 2019

Regulation and technology together with reports of change in the insurance market resulted in plenty of interesting news last month. Starting with regulation, the FCA published their business plan outlining their main priorities, together with an update on the ‘Access to Insurance’ initiative and their progress with technology. In addition, they issued a report on the General Insurance Distribution chain.  Technology news includes the ubiquitous ‘insurtech’ again, together with Machine Learning . Both continue to generate interesting column inches.  Finally we have an update on an exciting new re/insurer; changes for Lloyds of London and plenty of interesting research for the insurance market.

In addition, the plan sets out three longer term priorities:

Interesting Forbes article, In Travel Insurance, Machine Learning Is Turning Conventional Wisdom On Its Head. The article highlights work done by Allianz. The Insurer has added machine-learning and artificial intelligence technology to offer real-time personalization. As a result of this technology driven initiative, Allianz can now deliver a travel product recommendation in less than a second.

Other insurance stories in the spotlight

In a recent Press Release, Lloyds unveiled a number of initiatives “that could shape the future of the worlds (re) insurance market.” In brief, the new ideas outlined are:

For the most part, the reported reaction from the Insurance Market is positive. Jeanette Newman, the President of the Forum of Insurance Lawyers (FOIL) summed up the general sentiment. She said “We are particularly excited by the bold focus on the use of technology to re-shape the future of the market. The creation of a complex risk platform leveraging data and technology plus the fast track ‘syndicate in a box’ for the out-performers will help catapult Lloyd’s back where it belongs – a home for the best talent at the forefront of risk transfer.”

The European Union (EU) have provisionally agreed to make Speed limiting technology mandatory for all vehicles sold in Europe. Under the current proposals, the regulation will be effective from 2022. The Department for Transport has already said that the rules will apply in the UK, despite Brexit. Not only will this be a huge change for the motor industry, but it is also bound to impact on insurance. Useful information in the article,  UK is set to adopt vehicle speed limiters.

The document is full of interesting statistics, for example this chart shown below : 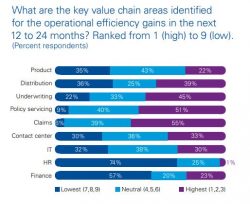 Get in touch with our team today Contact Us

Some of our clients

"...insurance by subscription gives insurers and customers much more flexibility, which is needed in our rapidly ch… https://t.co/FzcxtC6FvA
h J R
@totalsystemsplc